History of the Award

The Duke of Edinburgh's Award was founded by His Royal Highness,  Prince Philip to encourage personal development and community involvement for young people through four distinct areas: Community Service, Skill Development, Physical Fitness, and Adventurous Journey. Since its establishment in Canada in 1963, more than 350,000 young Canadians have taken the challenge which has Bronze, Silver, and Gold levels of the Award.

Cadets are entitled to wear the Duke of Edinburgh pin which is awarded upon successful completion of each level on their uniforms, making it an easy way of saying "That cadet is above average", since they are not commonly seen on uniforms. The best part about doing this program as a cadet is that the you are already involved in many areas of the challenge without doing anything extra!

The Duke of Edinburgh program can be coordinated through 24 Squadron. Interested Cadets are to ask the CO about the program. 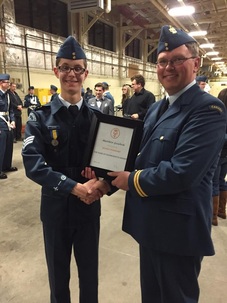 How do I join?

The Duke of Edinburgh's program is offered to youth between the ages of 14 and 25, and thus you must be a minimum of 14 year's old at the time you join the program. There is an initial registration fee of $30 plus $20 per year until you complete the program.  These fees are not covered by the Squadron since this is a program offered outside of the regular Air Cadet training.
For more information please contact CI Proudler at (403) 505-3739.
Further information can be found on the Duke of Edinburgh Website